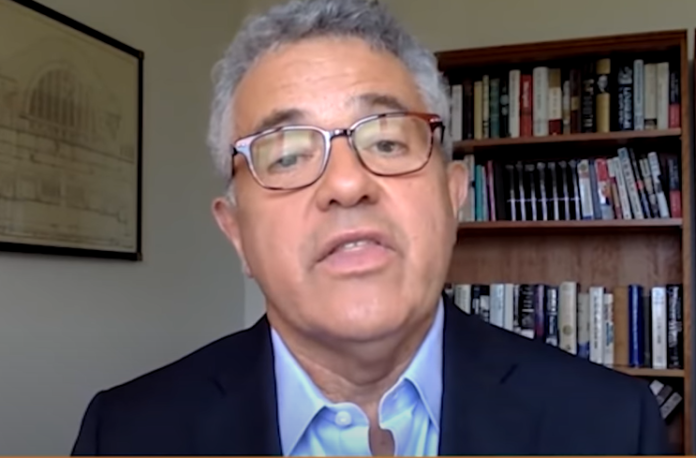 A once respected CNN analyst has disgraced his name and reputation in less than a pathetic 2 minutes.  For those who missed the breaking news, Jeffrey Toobin, 60, dropped his pants, threw lotion on his hands, and stroked himself off in front of colleagues on a Zoom conference call.

“I made an embarrassingly stupid mistake, believing I was off-camera. I apologize to my wife, family, friends, and co-workers.  I thought I had muted the Zoom video. I thought no one on the Zoom call could see me.” – Toobin

Let us get this straight.  A 60-year-old man was caught stroking off in front of his colleagues. STROKING OFF.   In any other situation – stroking off in the breakroom, parking lot or even his office – Toobin would automatically be fired, arrested, thrown in jail, and put on the sex offenders list.  Given the nature of the world, shouldn’t a Zoom call, described as an “election simulation” be considered work?

We thoroughly think so.  And to be clear, Jeffrey Toobin pulled his meat wagon in front of seven employees including Jane Mayer, Masha Gessen, Andrew Marantz, Jelani Cobb, Evan Osnos, Sue Halpern, and Dexter Filkins, instead of being on a Zoom strategy call.  And to make things even more comical, rumors are floating around Toobin was on a second call with someone else while tugging his hog.

In what was likely one of the most embarrassing moments of his life, the entire world roared with laughter.  Even O.J. Simpson even chimed in saying, “Daaaaamn, Jeffrey Toobin. At least Pee-wee Herman was in an X-rated movie theater,” Simpson said in the clip. “I’m just saying.”

For those who do not know the actor for Pee-wee Herman, Paul Reubens was arrested in 1991 for fondling himself in a public movie theatre.  Simpson’s remarks stem from a long line of hatred with Toobin’s highly successful book, The Run of His Life: The People v. O. J. Simpson.

Analysts estimate with Toobin’s suspension from CNN and the New Yorker, he will now have even more time to pull his meat stick.  And with a wife that is likely beyond livid, he better get used to his right hand.

To be upfront, we are still looking for a public shaming by Donald J. Trump, given Toobin’s recent book, True Crimes and Misdemeanors: The Investigation of Donald Trump. Rumors are circling that the Don is currently writing a book titled, The Small Size of Toobin: The Man Who Pulled His PP For 30 Seconds