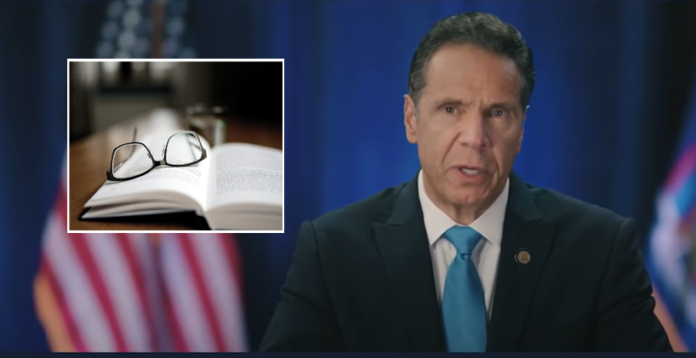 New York Gov. Andrew Cuomo, who has found himself in the national spotlight this year as a key character in the ongoing coronavirus epic, is writing a new book that looks back on his experiences navigating sexual misconduct allegations.

The 690 page book includes not only leadership advice, but also relationship counseling, and bizarrely a few personal anecdotes about his experiences perusing the New York City bars looking for single mothers to court.

One zinger of a story that Cuomo’s agent leaked to the media as a teaser recounts a night this summer when Cuomo went to a *wink, wink* socially distant party at an NYC speakeasy frequented by the city’s elites during the pandemic and while he was disappointed not to stumble upon any single mothers, he did have a spicy encounter with the maître d’, after repeatedly inviting her back to his apartment where he told her he had extra vials of the vaccine laying around.

When the two got back to his 2600 square foot penthouse, she was disappointed to find that he had used up all 750 doses of the vaccine that he had siphoned out of production.

“It is all about creating a narrative and running with it,” Cuomo says of the night in question in Chapter 6, titled: Are the ‘Facts’ Overrated? “Did she think that she was going to get the vaccine when she got to apartment? Yeah, I guess you could say that. But was that really what she was after? Hard to say. You know women, never really saying what they mean. In my mind, you have to believe that every woman wants you to squeeze their ass no matter how uncomfortable they look. Believing is half the battle.”

The timing of the book is curious considering the number of calls for the Governor to resign in the wake of these allegations.

When asked, Cuomo told The Stonk Market that he’s confident that he will be able to stave off his critics by blindly ignoring the reality of what he has done.

“Besides,” he explained, “There is no better time to sell a book than in the middle of a controversy. And THAT—is a fact.”