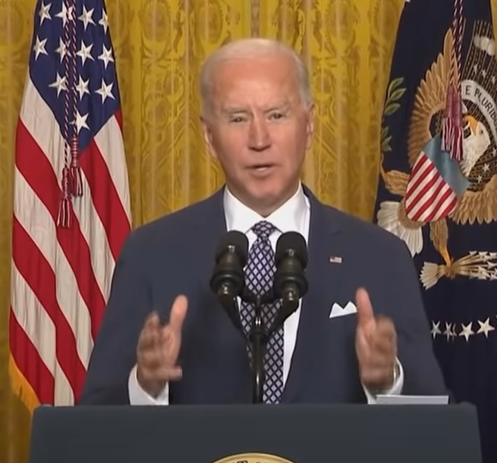 El Paso, TX – President Biden broke his silence on the border crisis Thursday addressing critics and photos circulating on twitter of immigrant children being housed in crowded tents and corralled under bridges. For the first time, the President did confirm that though the conditions were physically inhumane, his administration was doing everything in their power to ensure that transgender rights were being upheld to ensure an emotionally humane environment.

“I want the American people to know that while these children are sleeping on concrete under tin foil blankets, their choice of pronouns are being respected,” said Biden. “Let me remind my Republican critics that stacking these children side-by-side is saving taxpayers money, and it is making it easier to organize them by their preferred gender expression.”

Republican congressional leaders became suddenly concerned about the living conditions of unaccompanied immigrant minors on January 21st, and their criticisms have grown louder as evidence of objectionable housing conditions over the past 6 years surfaced. Project Veritas (known for their photography of Bigfoot and the Loch Ness monster) have been releasing several photos they say show inhumane housing conditions that suddenly appeared at the end of January. These photos have sparked outrage across twitter and conservative talk personalities.

“Trump’s cages were never this full,” remarked conservative talk radio host Jerry White, “I mean, we never talked about it back then, but I checked them out. They were only putting two to three children per 4×8 cage. Biden’s cramming these kids in there like it’s a Kanye concert.”

Biden initially also received criticisms from the more progressive members of his own party, but those complaints were quelled when members learned of the extreme efforts being undertaken to ensure transgender rights were being upheld.

“It’s a tough situation for everyone,” stated Rep. Rashida Tlaib (D-Mich.), “but we are happy to hear that President Biden is upholding his promise to Latinx immigrant children by ensuring that their gender identities are being kept whole. When these children go to sleep tonight surrounded by 200 other kids inside a prison cell, their hearts will be warmed by the fact that America values their non-binary status.”

Criticisms of the physical conditions remained largely unaddressed by the President, possibly due to his desire to include larger cages and burlap blankets in his $2 Trillion infrastructure plan. Administration officials expect the outcome of that plan to be known in the next 2-3 months.

State supplied Pelotons, free public Fleshlights, and Chaturbate webcams in every home; here are the top things investors should know are in Biden’s $2...