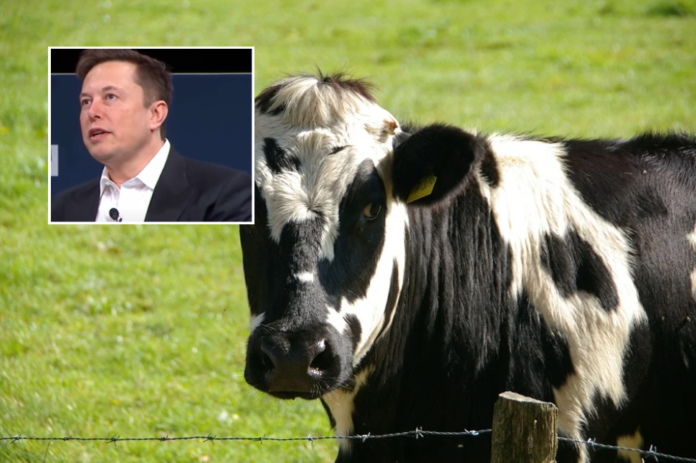 “I thought it was steam pouring out from their Heavy Booster engine test. Growing up in Scranton, PA everything was eco-friendly steam.” Now I’m being told this was essentially a massive Methane dump right into the ozone layer.”

With that, Biden authorized a series of Executive Orders declaring NASA operations become carbon neutral and that all launch fuel henceforth be generated by capturing bovine methane release.

Elon Musk tweeted his support, saying that “if there’s an opportunity for me to profit from massive government pork, I’m there and who doesn’t love cows!” In a Clubhouse interview he elaborated, that he was told carbon neutral meant, “I had to offset my super green electric cars with massive environmental damage. So of course I’ve poured billions into enormous exploding rockets, tunnels to nowhere and Bitcoin.”

NASA officials could not be reached for comment, but could be seen at Cape Canaveral loading rockets with cows and feeding them massive amounts of beans, broccoli and onions.

Bitcoin was down 28% on the news that Musk was backpedaling and would be divesting from the controversial digital asset that requires huge amounts of fossil fuels to operate in favor of environmentally friendly Lithium mine operations in South America.

“Lithium is a win-win, it feeds environmentally friendly Tesla cars while empowering South Americans to strip their land bare and fill their lungs with toxic chemicals. Not to mention they’ll now work for me… and I’m great,” Musk said.

AOC immediately tweeted that “this wasn’t what we had in mind with the Green New Deal, but if it pisses off Republicans, I can add it in. “

Biden further explained that space exploration is a top agenda item. “Just as Kennedy promised a man on the moon and used carbon-based fuels, I’ll get a woman there using cow farts.”