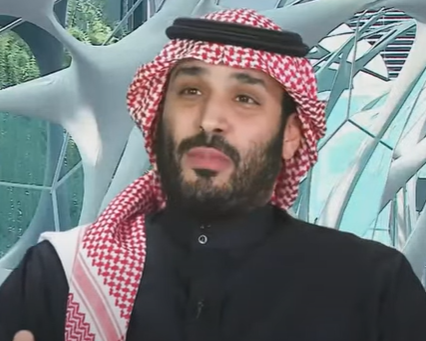 Simple words from Saudi Arabia’s Crown Prince, Mohammed bin Salman, but one look at the sadness in his eyes said it all. The culture of leadership and power denigrated right before is very eyes—for the whole world to see.

“Honesty is a key principle to me,” Salman said—looking up and to the left, “So I will level with you. I didn’t actually see Biden wear the watch in real time but reading it in The New York Times was almost worse. I knew it was going to be bad with Trump out of the White House… But this?!”

There was a tremor in his hands—and a slight whimper in his voice, as he continued to lament Biden’s decision to wear the stainless-steel Rolex Datejust watch.

“We are supposed to be leaders… Beacons of direction for all the wayward souls out there… And he has the audacity to wear that?! That thing only retails for around $7000! What is next? Are we going to see him circling Pennsylvania Avenue in a Corvette? How are the American people supposed to respect a man who lives like a peasant!”

It was strange to witness such a powerful man so visibly shaken. The tremors and whimpering were not even the worst of it either. The Crown Prince was utterly inconsolable when I let it slip that Biden’s wife, Jill was a Doctor. It was unclear if he was more disgusted by the women in the ruling class holding a job—or terrified by the thought of a woman making medical diagnoses.

He was, however, somewhat relived when I informed him that she was a Doctor of Education—and not one of the ones in the lab coats with a stethoscope.

Once he calmed down, he was kind enough to take me on a private tour of Riyadh, where I was staying. The Turaif District, the Masmak Fortress, we hit all the hot spots.

Overall, the trip was a success.

It was just too bad I couldn’t stay at the Ritz Carlton. It was the weirdest thing—all the lights were on and I heard sounds coming from inside, but when I asked one of the military personnel standing in between the building and a machine gun, he told me the hotel was out of business.