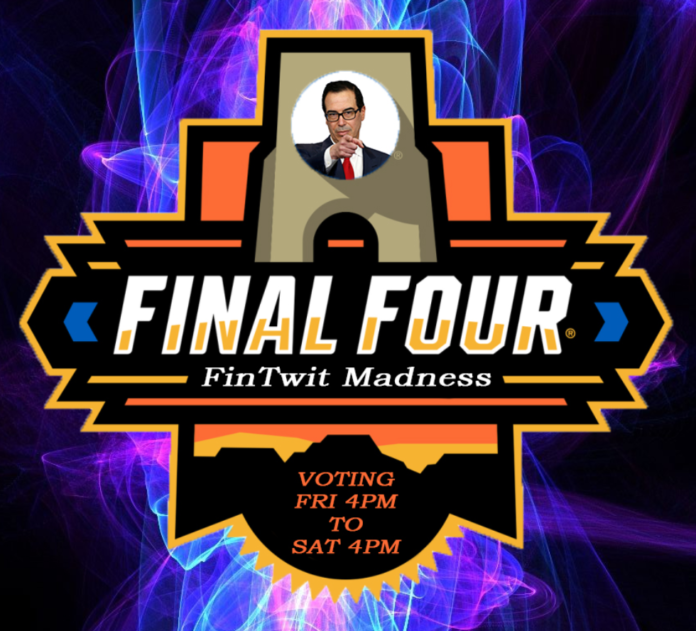 The third round of FinTwit Madness is in the books.  It was a more brutal round than holding call options from your 401K on Nikola.  As the round progressed into the night an earthquake erupted on a small island in the Caribbean killing everyone.  John W.B. Rich (Wealthy) spoke on CNBC that morning calling the former “islanders” a bunch of dead poors.  Markets roared on the news.

The Fourth Round of FinTwit Madness has now started.  Get your votes in here.  Follow our wonderful host, Mnuchins Munchies, as he guides us through the second to last round.  Be sure to read the commentary from round one and round two.  Now pound your drinks and buckle up you degenerate scum.

The Prophet vs. Le Flea

The Prophet defeated The Fly (disgusting) by a wide mile after calling upon the Lord in the heavens to release locusts onto Le Flea.  The locusts ate Le Flea then crapped him out onto a pile of horse dung.  The Prophet celebrated by turning worthless fiat currency into real assets.

Le Flea was last seen living on a stray dog’s crotch, trying to recover from the gruesome defeat.  His website shut down after he contracted herpes and hepatitis C.

Queen Wartooth defeated  Elmo’s Short Volatility Fund in a close match.  Queen Wartooth celebrated with her new boyfriend, Michael “William” Karaman in a dingy bathroom where they huffed spray paint and injected K2 for hours.  After “the party” was over Karaman punched several holes in Queen Wartooth’s upscale penthouse walls when he found out Queen Wartooth was in love with anime kink more than him.

Jerome Powell pulled ahead in the last minute of the competition against Ashley.  To celebrate his victory, Powell covered himself in KY Jelly and bathed in the United States deficit.

Ashely was seen crying in a rain puddle in downtown Manhattan.  Rumors are Ashely found God and became a born again Christian.  She was last seen trying to convert Dr. Parik Patel, BA, CFA, ACCA at his convivence store.

The esteemed Senator, Eloise Williams, won against the overrated Ramp Capital.  Eloise celebrated by releasing a video of Steve Mnuchin crying and farting on a freshly baked meatloaf.  Investors cheered as they bid up blue chip retirement tech stocks to dizzying heights.

Ramp Capital was arrested for impersonating the crippled and hauled away to a Federal Prison.  Ramp’s garden wilted and died later that evening.