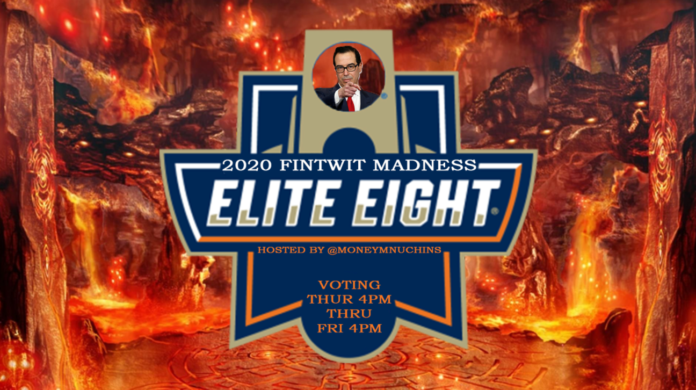 The results for FinTwit Round Two are in you degenerate scumbags.  And a whole lot has happened.  Buckle your seatbelts, grab a 40oz of your favorite malt liquor and tune in now as Mnuchins Munchies, the host of FinTwit Madness walks you through what happened in Round Two.  Be sure to vote in Round Three, if you don’t you will be considered a poor (dumb).

Dr. Patrik Patel vs. The Prophet

The race between the esteemed Dr. Parik Patel, BA, CFA, ACCA and and The Prophet was a match for the ages.  Dr. Parik attempted to use his army of Indian bot farms to out pace the Prophet.  But it was not match as The Prophet called upon Moses, Jesus and the Lord Almighty to sway the race in his favor.  The Prophet was later seen turning loaves of bread into bitcoin.  Dr. Parik Patel was last seen in a convenience store telling customers, “thank you come again.”

Uncle Rico vs The Fly (disgusting)

Uncle Rico lost by a wide margin to the disgusting The Fly.  Rumors are circling on FinTwit that The Fly bought his votes, just like he buys his followers.  Uncle Rico drowned his sorrows at the trailer park with a $5 dollar steak and Julia Cordova by his side.  The Fly was seen hovering around a pile of dog crap.

Jerome Powell handsomely beat Bag Holder Quotes.  Jerome Powell celebrated by drinking too much boxed wine then passing out drunk on the toilet with his pants to his knees.  Jerome Powell’s wife later served him divorce papers because he “sucks” in bed and she’d rather sleep with the 18 year-old pool boy.

Ashley destroyed the silver haired fox (Doug Boneparth).  Ashely continued to insist she wants nothing to do with this competition while secretly purchasing votes on the black market.  Doug Boneparth quit his job in wealth management and will now become a full time silver haired influencer.

The esteemed Senator, Eloise Williams, won against Chadford Whitmore VI.  Eloise celebrated by drinking her own piss then passing out naked in downtown Boca.  Chadford bet his life savings on this match and will now be moving back into his mom’s basement while Charles Gasparino ridicules him for life.