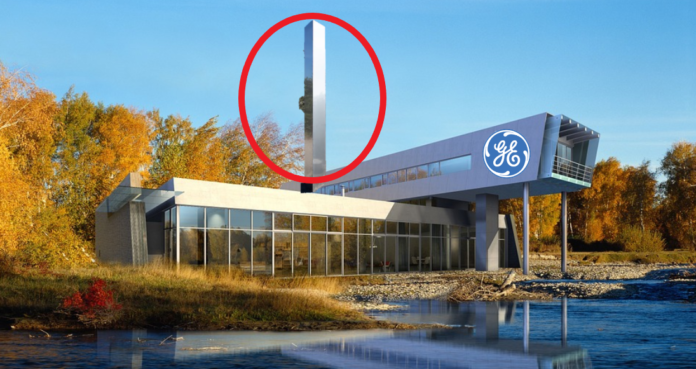 Schenectady, NY – General Electric (NYSE: GE) unveiled a mysterious metallic monolith Friday which appeared to be protruding out of the top their electric transformer factory on the outskirts of Schenectady. The purpose of the monolith remained unknown despite several speeches from senior-level officers congratulating the team that constructed it.

“Today we show the world that GE is back! And there is no better way to show that than jumping on an obscure sheet-metal art installation wave that has been gripping the country,” said CEO Larry Culp.

Up until now, Culp’s turn-around plan for GE had been largely successful, pushing their stock price up out of penny-stock territory for the first time in three years. Yet, when asked how the monolith would fit into the plan, Culp and other presenters did not explain in depth.

“I’m sure everyone watching already knows the purpose of these monoliths,” said Director of Engineering Sam Muller with a wink to the audience. “With this installation we are making it clear that GE knows what these monoliths are for too. If you don’t understand, then I’m afraid you just don’t understand art,” Muller said to uproarious laughter among the mostly GE staff audience.

Some investors worried that putting too many resources into the installation would slow down progress made throughout 2020 in the industrial energy line of the business. One investor asked about a report which leaked last month where an engineer whistleblower said the company was sacrificing public safety in favor of manufacturing meme-based prototypes for products never meant for market.

Culp and his team quickly deflected these concerns, responding “just look at this thing, what is it? You don’t know do you? I guess you just aren’t up with the latest trends,” which again was met with hysterical laughter among the GE employees.