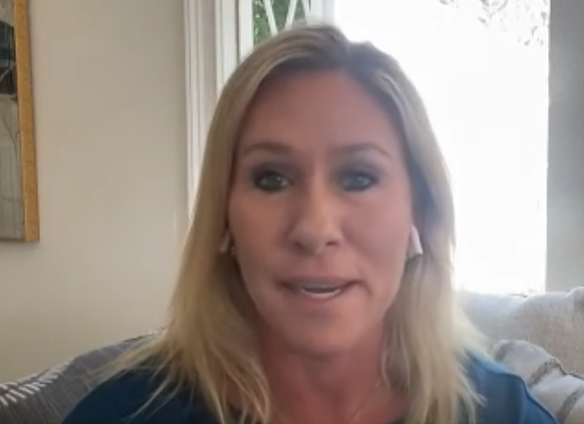 Controversial U.S. House Representative Marjorie Taylor Greene filed paperwork today to launch a special purpose acquisition company aimed at purchasing “the Jew space laser” that Greene believes is responsible for starting the wildfires that ravaged California and Oregon last summer. The 14-word filing states that the organization plans to raise $88 million, a number that has left many appraisers baffled.

“We’re really trying to tease out the popularity of the absurdity, as that ultimately drives the price of crack-pot theory assets,” said conspiracy theorist dealer Jacob Smalls. “$88 million seems extraordinarily high for a delusion that many weren’t aware of until only a few weeks ago. Now if we were talking about buying up the NASA-dome that flat-earthers think makes up the sky, that could possibly get you to the $80-100 million range.”

Smalls did note however that the imaginary property may fetch a higher price tag than similarly made-up assets due to its close ties to Neo-Nazi staples like the Jewish World Order and white genocide, but even that market has turned bearish following the January 6th raid of the U.S. Capitol. The Fascism ETF (NASDAQ: 6MWE) has sunk 15% since the beginning of 2021.

Greene did not issue a statement with the filing, despite many news organizations asking for additional details, but she was caught by Fox News reporters on her way to scream at parents of Sandy Hook school shooting victims.

“My people support me, and that’s what’s important,” she said to the news media through a mask with the word “censored” emblazoned across the front, “I’m doing this for you Q believers out there who have held the line, trusting the process, even months after Q’s prophecies never came to be.”

Greene’s move to launch the SPAC comes while she battles investigations for engaging in alleged “light treason” by calling for the execution of fellow congresspersons. Some investors are worried that her efforts to defend fascism in congress may impact her ability to navigate the choppy waters of SPAC management. Others are less concerned though, stating that congress has yet to hold any of its members accountable for anything in the last 40 years and that reports of her actions being taken seriously are grossly overstated.