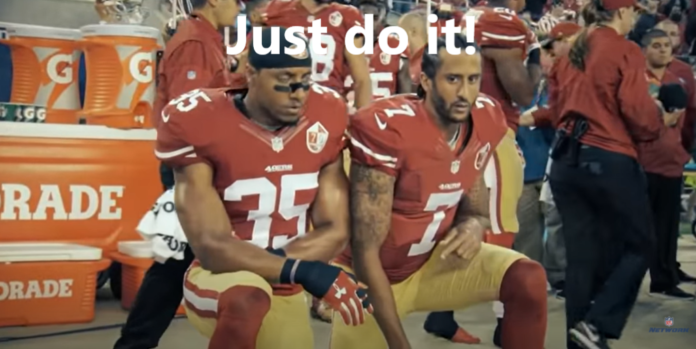 Capitalizing on the massive boost in sales following their signing of famed anthem-kneeler Colin Kaepernick and beloved activist and women’s soccer player, Megan Rapinoe Nike will be offering $100,000 to any athlete who takes a knee. In response to the announcement nearly the entire women’s soccer team was seen kneeling before the anthem.

Chris Nilsen, Olympic pole vaulter was nearly smashed in the face by an oncoming vaulter when he rushed to take a knee after hearing the anthem played to recognize athletes on an adjacent field. “I’m not sure how I qualify for that $100 G’s, so anytime I hear, ‘Oh, say can you see?’ I’m taking a knee.” His injuries were minor and a Nike spokesperson ensured Stonk Media that Nilsen will be “well taken care of” for his commitment to capitalizing on the ill fortune of those suffering from police brutality.

In a related incident, three Chinese athletes were shot and killed after taking a knee in protest of the slave like conditions and mass imprisonment of their fellow Uighar Muslims in Western China. Nike had no comment on the matter, but did say their 2022 sneaker production line will be on schedule “at any cost” for early holiday release in December.