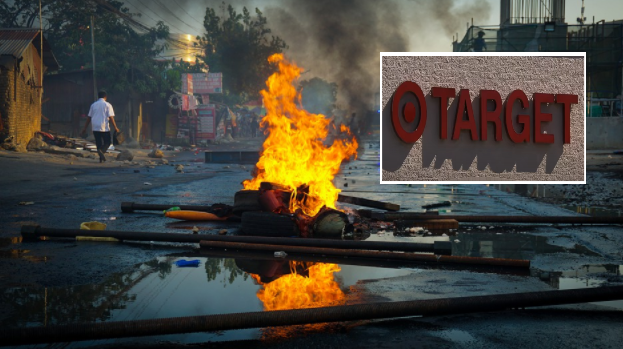 “I know there were some doubts on the riot strategy,” said CEO Brian Cornell during the earnings call, “but I hope these results lay the issue to rest. As our board pointed out in May last year, becoming a target, no pun intended, for rage against police brutality is a novel approach to leverage our vast real estate holdings towards securing additional profit streams for our shareholders.”

Target stores across the country were vandalized and set fire to last year when Black Lives Matter protests turned violent in response police-involved deaths across the country. The connection between fighting systemic racism and destroying the “nicer Walmart” was not immediately apparent until it became clear that Target was supporting rioter’s actions by placing pallets of bricks and lighter fluid outside of their facilities.

In June, Target’s Chief Diversity Officer Caroline Wanga had hinted at the broader strategy. “At Target, we aim to Expect More, and Pay Less,” she said in response to the first wave of violent protests, “we expect more of our police officers, and we are willing to pay less, or defund, those officers if need be.”

Investment analysts were largely skeptical of the strategy, with many saying that it cannot be feasible to make more money from burning down a store than selling the items in it. Many of those same strategists have had to eat their words in recent months however as the insurance payouts have grown exponentially over the past several quarters.

When asked whether raking in insurance settlements for riot damage is a sustainable value stream, Cornell pointed to the fact that police brutality and the riots they cause have shown no sign of slowing down.

“We know there were fears that a new administration would temper the racial animosity that had flourished under the past presidency,” continued Cornell, “but fortunately those fears seem to be overstated. Police brutality and lack of accountability among officers remains as healthy as it was pre-Pandemic. As a result, we are hoping for another blowout summer this year.”