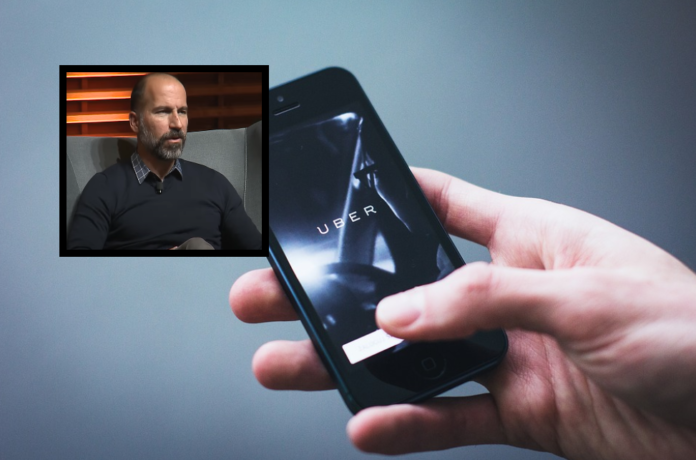 Uber’s CEO has been making headlines recently after raking in over $100 after a mere three hours of delivering for UberEats. Less well publicized, however, was the resultant loss of his employee status.

While shitting in the backseat of an Uber he ordered, a board member confirmed to  Stonkmarket,”As a driver, we refuse to recognize Dara as an employee. We can provide better value by using contractors and royally fucking them in the process. Plus, Dara did great, he earned a over eight dollars in tips!”

While this apparent mix up was comical to Dara when his ID badge no longer allowed entry to Uber HQ, he has now been living in his car for 96 hours, trying in vain to get in touch with any actual person at Uber in between restaurant stops to pick up orders.

We spoke with a disheveled Dara Khosrowshahi, who, in between bites of a gogo taquito, shared the following, “After answering a fuckton of annoying prompts, the customer service bot just says ‘Sorry for confusion. We aim to provide the best experience for our scumbag contractors, fatshit diners, and lazy fucking riders. We’re looking into the situation.'”

“What kind of bullshit response is that? We both know no one there’s no one reading that shit! My kid has goddamn Polio! His next surgery is Monday and my wife says our health plan’s been cancelled. I always thought it was great how none of our drivers ever got sick or required time off or health insurance, but I’m not contractor class. This was all just a cute publicity stunt!”

Uber, which has faced criticism over its refusal to provide stable employment and benefits to people who definitely should be labeled employees, was firm in their position on their former CEO.

“Here at Uber, we are an app-based business solely committed to fucking over everyone possible. If you drive for us and a customer threatens you or hurts you do we ban them? Fuck no! You better them give a 5-fucking-star rating first because they will see if you give them less and royally fuck your shit up! Dara should’ve fucking known better, we signed our corporate principles together over an eight ball at the board meeting last year!”

The aforementioned board member added, while screaming at a single-mother Uber driver he’d give her 3 stars if she didn’t allow him to take her child for the auction.

While absconding with the child he further stated, “Look we got a simple kickass font, sexy logo, a sleek ass app, and a bad ass name, what more do you fucking want from us? If people don’t like our policies get a car or a real goddamn job, fucking scumbags. We’re an app, not a goddamn daycare for handling your problems.”