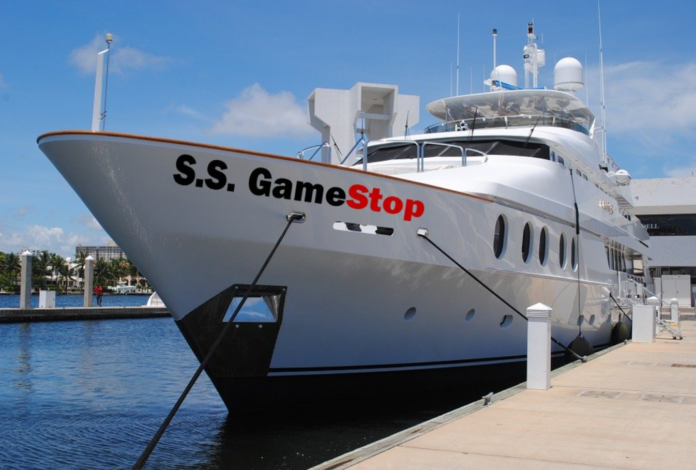 Los Angeles, CA – Value investor and hypogonadism sufferer Benjamin Merkle has upped his reward for information leading to the successful return of his wife Cynthia Merkle after she was last seen boarding a mysterious yacht with the badging the “S.S. GameStop.” The reward now sits at $15,000; an amount that Mr. Merkle says generously prices the future expected cashflows of the asset.

By all accounts, the Merkles lived a happy middle-class lifestyle, albeit well below their means. Mrs. Merkle could be caught driving her 1998 Honda Civic from their 3-2-2 home in Reseda, CA to the local Walmart to buy discount groceries. Meanwhile, Mr. Merkle was often found collecting recycling to return for a cash rebate. Their frugal lifestyle belied the fact that the Merkles both earned six-figure incomes, the majority of which they were sinking into value stocks in the hopes of one day reaching financial independence. Their plan seemed to be working until two weeks ago when Mrs. Merkle unexpectedly left her husband and joined a group of scantily clad women boarding a shadowy yacht in the Port of Los Angeles.

“We had plan, save as much as we can and shoot for 8-9% annual returns, and it was working great,” said Mr. Merkle, “after forgoing vacations, restaurants, and retail clothing for over ten years I figured Cynthia was living a happy life. I’d like to think she wasn’t caught up in all of this memestock FOMO, but you never know.”

Similar disappearances occurred during the January Bitcoin boom but were not nearly as extensive. Law enforcement investigators attribute this to the fact that crypto investors are “too weird” for even the most dedicated gold diggers.

With GameStop stock making its third rally of the year, value investors across the country are worried that the trend will continue. However, when asked if the success of memestocks will at all change their investment strategy, almost unanimously their response is “no, because someday I’m going to be just like Warren Buffett, married to a wife that left him and living in a house that a teacher could afford.”