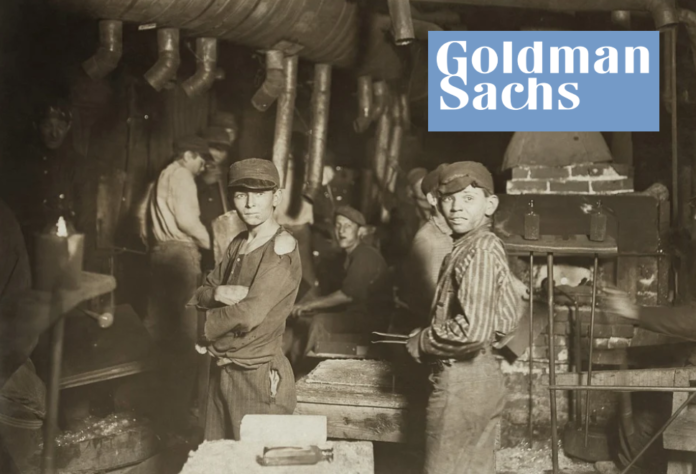 Wall Street banking firm Goldman Sachs was dealt another human resources blow this week when 55 employees publicly quit and walked out of the building with no prior notice. The move was touted as a protest against the company’s grueling culture and unwillingness to cap expected work hours at 80 hours per week. The event was livestreamed on Facebook while members of the ad hoc quitting club boarded an austere cargo ship headed for the Port of Shanghai.

“After missing my sister’s funeral to make my third slide deck on eastern-European interest rates ‘due by close of business Sunday,’ I decided it’s either this or suicide,” said former Goldman Sachs Junior Analyst Carlos Montez.

Though the move appeared spur of the moment at first, closer investigation revealed that the act had been planned for months. Even more curious however was the desire for employees to jump from a high-paid, white-collar job in New York City to borderline slave-labor outside of Qingdao, China.

“Management really left us with no choice. We thought about leaving for JP Morgan or Citi, but I mean c’mon – those losers? I’d rather be flipping OTC pennies out of Omaha, Nebraska,” said former employee Samantha Chalmers. “At first we looked at going to Amazon warehouses, but all this unionization talk got us spooked. Everyone knows unions make things worse for employees.”

Samantha became a leader in the movement when she posted a list of her grievances in a private telegram board for analysts at Goldman Sachs. When she found that she was not alone in her desire to sleep more than 5 hours a night, she launched a group exodus that her and her colleagues referred to as “Saturday Rule My Ass.”

When asked about how the group expects to adjust to life in a Chinese Nike sweat shop, many members simply smirk, saying things like “it cannot possibly be worse than what’s going on at Goldman,” and “my apartment in New York is literally smaller than the boxes they cram people into in Chongqing, I think I’ll be alright.”

Representative Alexandria Ocasio-Cortez (D-N.Y.) tweeted about the walk out saying “another huge loss of potential due to greedy wall street executives and their unwillingness to address trans rights and racism among their ranks.”

The ship full of ex-Goldman Sachs employees is scheduled to reach Shanghai in 6-8 weeks.