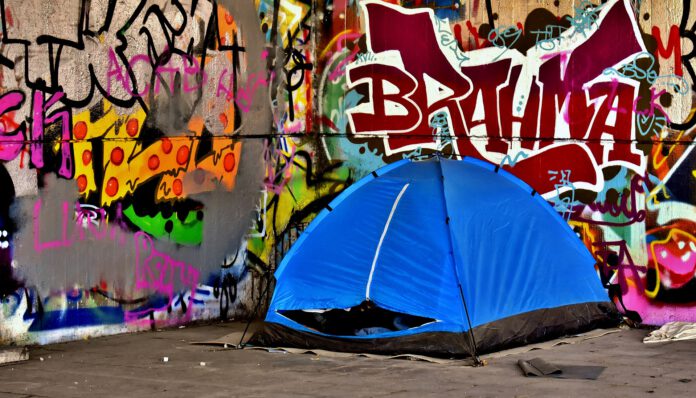 ANAHEIM, CA – Disneyland Resorts announced the latest addition to their California Adventure Park Wednesday. “Skid Row Land” promises to complete the California experience for visitors by offering climbable carboard box houses, oil drum-fired restaurants, and a colorful drug-themed shopping cart rollercoaster. The area is set between the “Hollywoodland” and “Pacific Wharf” sections of the park and aims to capture the enchanting plight of California’s hordes of dispossessed with elements of Disney’s signature magic sprinkled in.

“For over two decades now we’ve celebrated much of what California has to offer,” said Disney Parks Chief Promotions Officer, Janja Gupta. “But our park has long lacked a key element of the California experience, namely the waves of homeless and mentally ill that flood our streets and parks. Today we can now proudly share that experience with everyone.”

The area is described as a combination of the dystopian trash filled world of Wall-E, Aladdin’s Agrabah including starving children attempting to steal food, and the poverty-stricken Nottingham from the Disney Classic Robinhood. However, park designers made sure not to lean too hard into the Disney fiction library and worked diligently to also capture authentic elements of California’s slums.

“We really packed this place with trash, a lot, lot of trash,” said Skid Row Land chief designer Sarah DeVos. “It was essential that our guests feel the same sense of fear and hopelessness that someone actually living in California might experience.”

Guests familiar with the California ghettos of Venice Beach and San Francisco’s Tenderloin district will be pleased to see museum-grade quality recreations of fecal-lined streets and spent needle piles between the burning tires and makeshift tents. Untraceable smoke, odors, and sirens will be emitted throughout the area, providing a truly immersive journey into the heart of the state’s tent cities.

Perhaps the most exciting to visitors is the introduction of a whole series of Disney characters inspired by the streets of California. Many of the characters will be found uncomfortably following guests through Skid Row including half-dressed men shouting at walls, rabid dogs, and heroin addicts trudging into traffic. Lucky parkgoers might even find a crippled Tiny Tim pulling on their pant cuffs asking for a spare dime.

Wednesday’s announcement did leave out some highly anticipated California attractions which are rumored to include Goofy’s city council meeting, Minnie’s Vivid Entertainment Experience, and Wildfire. Insiders say these rides are in the pipeline and could be announced as early as 2022.