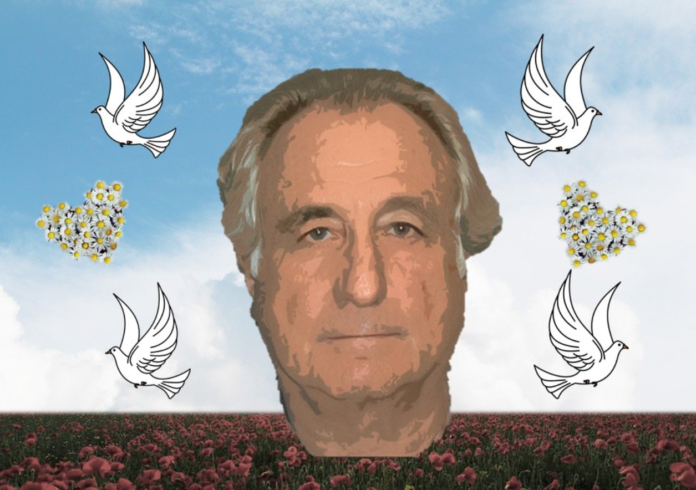 BUTNER, N.C. – A collective moment of silence was felt across the investment community today as word spread of the passing of Bernie Madoff, unarguably the greatest Ponzi-scheme player of all time. Twitter and Facebook posts from traders and private equity firms alike offered their condolences and shared their favorite memories of the man who forged unprecedented levels of investment fraud. Many argued that the term “Ponzi-scheme” should be renamed “Madoff-Scheme” in his honor.

Bernie was born in Queens, New York to Jewish family in 1938. In 1960, he married his wife Ruth and started a penny-stock firm where he learned how easily investors can be duped when they think they are beating the market. Using this knowledge, his firm Madoff Securities grew over the decades to become the largest market-maker on the NASDAQ. Madoff’s crown jewel achievement however was taking investor’s money, putting it in a Chase Bank account, and then paying returns by acquiring new “customers” to supply “returns.” This work went on for decades, costing investors an estimated $18 billion, until 2009 when he was indicted on 11 federal financial crime felonies.

A shining example of the man’s character was displayed when Madoff pled guilty to all charges and refused to name names of his co-conspirators. A long-running (but never confirmed) rumor is that Madoff was the creator of the term “snitches get stitches,” which he coined while promoting the tacit honor code among newly minted Wall Street insiders. He adapted well to prison life, quickly entering yard fights with other inmates, and befriending incarcerated Mafia family members.

Through his Madoff Family Foundation, Bernie had donated over $20 million of his stolen money to philanthropic causes. In addition, he managed the funds of several charitable foundations around the world for causes for which he was so passionate that he bankrupted them as well. Many in the money-laundering/wealthy family foundation industry mourned the loss of the man who had shone such a bright light on the often-ignored world of charity fraud.

Bernie is survived by his wife Ruth Madoff. The family asks that in lieu of flowers, donations be made to the Martin Shkreli Innocence Project.