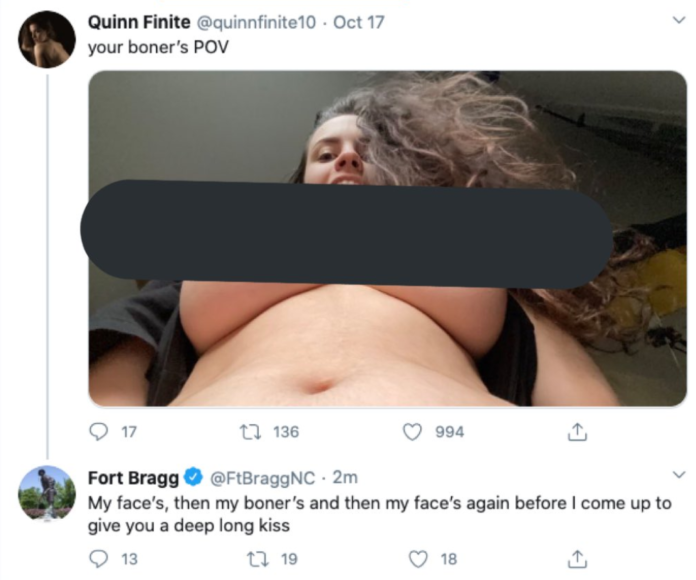 Sophia Narwitz, local hero, screenshotted these tweets and shared them with the world.

As many of you know, there were a string of explicit Tweets from out account this afternoon. This was not the work of our admins. Our account was hacked. We apologize to our followers. We have secured our account and looking into the matter.

Fort Bragg later deleted its Twitter account shortly after the incident.  However it appears as if the account was not hacked and an administrator sent the inappropriate tweets.

This morning, at the initiation of an investigation into yesterday’s incident regarding inappropriate tweets on the Fort Bragg Twitter account, an administrator for the account identified himself as the source of the tweets. Appropriate action is underway.

Whoever tweeted the message to the lovely Quinn, one thing is for certain, the man who tweeted this will go down as a legend.  Heroes get remembered, but legends never die.

In other news, stocks rocketed on news that the U.S. Army has zero security measures regarding their social media applications.  Investors rushed to buy nuclear warhead manufacturers as a “fat finger” slip is more likely to happen now destroying the entire world.  Economists on CNBC have said countless times that a nuclear war is extremely bullish and all should “buy the dip”.