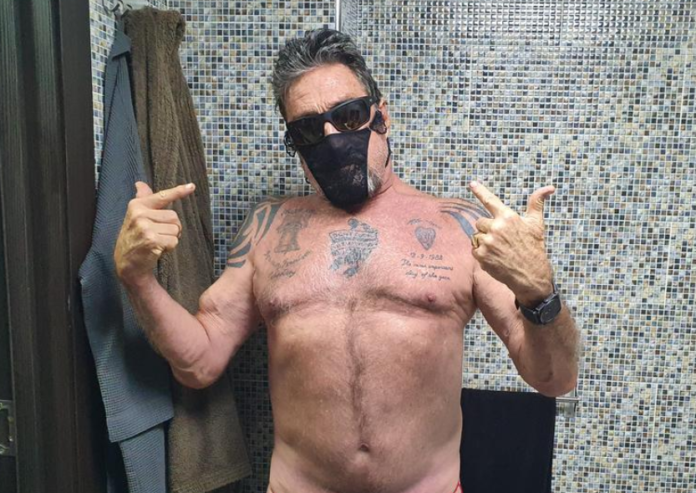 THE DEADLY SEAS – Live streaming from his pirate ship, John McAfee, hero businessman and libertarian finally ate his own dick.  “It wasn’t that bad at all,” a drunken McAfee stated with blood dribbling down his chin.  “However I am still hungry.”

John McAfee is the rebel businessman, libertarian and hero of the free markets who created McAfee Antivirus.  Since selling McAfee Antivirus, John has been an outspoken voice on bitcoin.

While evading Federal authorities in the Indian Ocean, McAfee got hungry.  “I packed a lot of liquor and women, but forgot the food.”

So instead of harpooning a whale, McAfee decided to eat his own ‘whale’.  “With a little salt and some Tequila it wasn’t all that bad.  Kind of tasted like chicken.  Still hungry though.”

While live streaming the feast, McAfee chugged an entire bottle of Tequila, played the piano with his pet parrot and gave an entire speech on the freedom a libertarian government would give the people.  When the feast was over, McAfee coded the entire script for Ghost Coin then passed out.

Since the great feast, businessmen and politicians across the globe have praised McAfee for the greatest triumph since the first summit of Mt. Everest.  When asked how he felt John stated, “I still feel like I’m in that acid trip and I’ll eventually wake up and forget this all happened.”