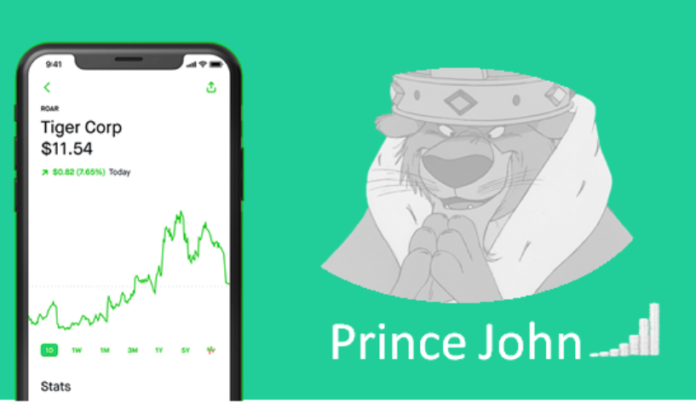 SAN FRANCISCO, CA – Vlad Tenev, CEO of the zero-fee investor platform Robinhood, announced Thursday morning that the company would be pivoting from its stated mission of opening up stock trading to a broader audience and instead more candidly disclose its actual mission of leveraging its userbase towards securing profits for institutional hedge funds. The company is so committed to the move that they have decided to rebrand as “Prince John Trading,” a nod to the main antagonist in the Robinhood story.

“In 2013 we said that we were out to change the investing world, to help everyday investors access the same tools used by Wall Street insiders, in hopes that they would more quickly lose their money to hedge funds and we succeeded,” Tenev said during an interview on CNBC. “As it turns out however, these investors learned far more quickly than we anticipated and are now starting to reverse the trend, taking money from the hedge funds we sell their data to. This, obviously, is an unsustainable business model.”

Tenev is referring to the alleged coordination on the part of retail investors over the past few weeks with GameStop (NYSE: GME), Blackberry (NYSE: BB), Nokia (NYSE: NOK) and AMC Theaters (NYSE: AMC), which aimed to mimic the market control typically reserved for investment banks and insider trading congressional members. Leaders in the traditional investment community initially fought Robinhood’s efforts to eliminate trading commissions, until they realized it would provide mountains of trader data that could be used to front-run the market. Objections were dropped in exchange for the data, and Robinhood was allowed to continue. The relationship soured over the past week though, as Robinhood users found a flaw in the platform that inadvertently provided a means for retail investors to actually earn returns.

Robinhood announced Thursday morning that they would halt purchasing of stocks that are allowing users to earn returns and refocus the platform to its core mission: accelerating the end of the middle-class. To accomplish this, the company announced its name change to Prince John, the usurper of the throne of England and avaricious despot from Robinhood lore.

“Companies, like people, change, and it is time to accept that our initial branding of Robinhood never truly reflected our values,” Tenev said. “With our new name, we can be free to show our true colors: cowardice, fraud, and laughing at the impoverished.”

The move roiled Prince John users, with twitter and message boards calling for users to delete their Prince John accounts. Yet, despite the controversy user counts remained stable as it appeared all other mainstream stock brokerages were coordinating to prevent users from purchasing GameStop, Blackberry, Nokia, and AMC stock as well. The collusion appeared to analysts as an attempt to tank the stock prices, right the ship, and secure the profits promised to major hedge funds.