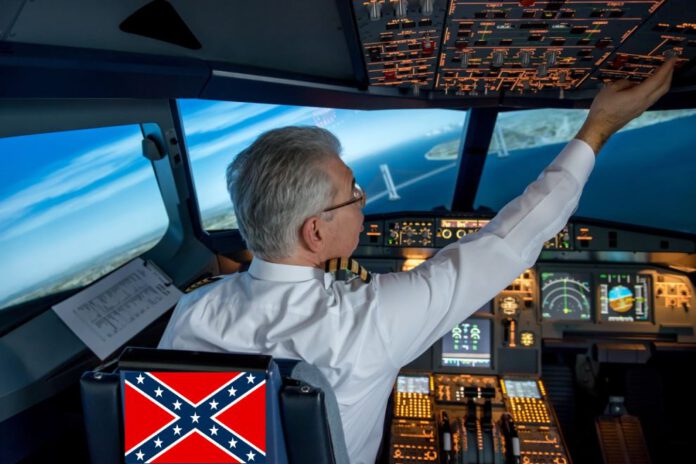 As many of you viewers may have read, our dear friend Brandon Brown has been getting a lot of attention after winning the big NASCAR race. The phrase “Lets go Brandon” has become a theme in many households across America. But some are offended by the idea of cheering on somebody where their soul job is to turn their vehicle to the left while going in a circle super-fast.

The Associated Press later went on to state that the passengers were fearing for their lives, because everybody knows that NASCAR fans are uneducated hicks from Alabama with about half the brain cells of other more educated folk. In face, nobody on that plane wanted to die in a reckless stunt that this one fan may be about to pull, as if he was reenacting the Dukes of Hazzard.

Zach from New York had this to say, “imagine realizing you just entrusted your life with somebody that has such poor judgement.”

In addition, many passengers were afraid the pilot would then proceed to do “burnouts” in the sky or start revving the engine to show his support for the so called “sport”.

We reached out to Southwest Airlines for comment, and they had this to say, “we are outraged that passengers had to listen to that NASCAR redirect. One employee’s individual perspective should not be interpreted as a viewpoint for Southwest and its collective 54,000 employees. We are not all stupid hicks from Alabama.”

Southwest is currently doing an internal investigation on the event and trying to find out if any other employees are going to be shouting this dangerous message. Southwest does not tolerate any behavior associated to NASCAR such as creamed corn, burnouts, and racecars that turn left while going super duper fast.