The Stonk Market
Home Business Walmart Down 6% This Week After Forgetting To Mention Black History Month... 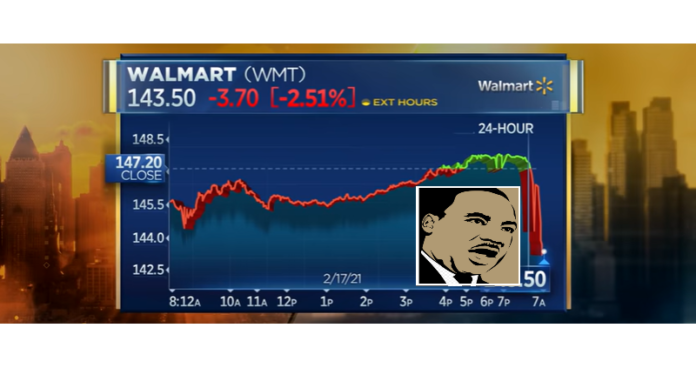 Retail behemoth Walmart (NYSE: WMT) suffered its worst stock price drop in over two years after its failure to mention Black History Month during its quarterly earnings call. Investors are now, more than ever, placing value on empty virtue signaling in company performance disclosures and Walmart’s failure to mention either Black History Month or even a hint that Black Lives Matter was seen as a critical oversight of the management team. Analysts worry that the gaffe may have been unintentional, an even worse signal in a market that is now de facto requiring companies to firmly pick a side in the American culture wars.

“We didn’t expect Doug [Walmart’s CEO] to come out in a dashiki and do an eight-minute moment of silence for people of color affected by police brutality,” said Senior Deutsche Bank Retail Analyst Lloyd McGuffy, “but we were expecting a least a passing remark about the stunning bravery of Colin Kaepernick or a mention of a black inventor no one had heard about.”

The omission of anything related to Black History Month suggests that Walmart may be losing its grip with the elitist millennial demographic – the only stateside customer bloc with double-digit demand growth.

“Walmart executives sincerely apologize to the community about the lack of Black History Month recognition in our earnings report,” said Walmart Director of Public Communications Cheryl Torrey. “We as a company respect all people, including those of Black, Asian, and Hispanic/Latino heritage. Our core company belief is that all employees are equally expendable and that all union efforts should be violently subdued equally, regardless of race.”

Racial equality leaders were not convinced, and many felt that the clean up efforts actually added to the suspicion that Walmart was not actually committed to repeating vague platitudes or supporting ineffectual movements.

“Did you hear their ‘apology,’” exclaimed anti-racism activist Tobias Jackson, “They may as well have come out saying ‘All Lives Matter’ with that dog****. Then, to top it off they use the gendered ‘Latino,’ instead of LatinX. I think it’s time that we acknowledge that Walmart is now a pillar of Nazism in America and treat them as such.”

The events have significantly impacted the long-term outlook for Walmart’s profitability. If the brand falls into the MAGA side of the culture wars, whether by choice or by being forced there by twitter, worst case models show that the company’s revenues could be halved by as early as 2023. Products and services in the MAGA space drastically underperform their peers in the Woke space as they are stuck chasing after a declining customer base (due to guns and methamphetamines) whose mostly welfare-based income has been threatened as Governments look to cut budgets in response to the COVID-19 Pandemic.

The next few months before Walmart’s next quarterly earnings report is likely to be a vital pivot point for the company’s future.